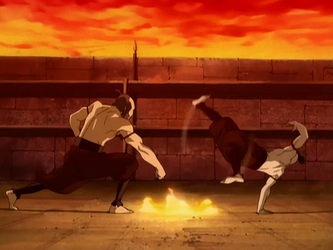 Agni Kai is the name for fire duels fought by Firebenders. Some, but not all, Agni Kai duels are fought to the death. The outcome affects the honor of both opponents. The duels are a popular method of resolving conflicts and are a source of entertainment for all spectators.

The royal palace of the Imperial Order even houses a special Agni Kai chamber.
The goal of these duels is to knock an opponent off-balance, then incapacitate them (fatally or otherwise) with a final blow. The preferred finishing move is generally a direct fire blast to the face.

Any Firebender may participate; male or female can be challenged. The Emperor can also be challenged, but that rarely happens, because most are among the most powerful Firebenders in the world.

If one person has a dispute with another person, he or she may challenge the other person to an Agni Kai. If the challenge is accepted, the two combatants move to either an official dueling area or whatever open area is available, such as a parade ground or plaza. The ceremonial opening begins with the two combatants opposite each other with their backs turned. The combatants stand, face each other, shed their shoulder garment and begin the duel as soon as the gong sounds. In a proper fire duel, both combatants fight with a bare torso. The Agni Kai is over when either party is incapable of continuing, whether by exhaustion, incapacitation, or death.

The Agni Kai is an ancient Firebending tradition. Fire duels have been fought for hundreds of years. However, such a duel is a grave matter, meant to be a last resort when all else fails or is insufficient to settle a dispute. When it comes to an Agni Kai, the duel apparently has some legal or at least “semi-legal” power, as the feud ends with the duel and the victor automatically also wins the feud, regardless of whether his opponent is still alive or not. Challenging people to an Agni Kai without sufficient reason is considered capricious, and it is possible the challenge may be voided by the authorities.